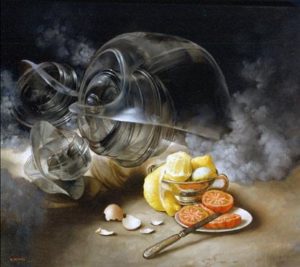 The artist constantly proposes, in his paintings, this fascinating element that has strong symbolic values. The spiral, the basis of its structure, has been in many cultures and since ancient times considered a symbol of perfection.

Since prehistoric times this form struck the imagination of men, who probably observed it in the concentric circles and in the whirlpools that are formed in the water, evoking a “sinking” in the waters of the afterlife, which would explain why such spiral signs appear in shape graffiti (petroglyphs) on the large blocks of stone that in prehistoric times served as sepulchres. But for the artist the spiral represents above all the idea of ​​relativity and deception of our relative perception.

If we look at the spiral from the outside to the inside it gives us the impression that it ends at the center, just like that of a snail. If we look at it from the inside out it seems that it goes on endlessly.. However, we know that the spiral, by definition, is infinite in both directions. But it also and above all represents the duality and ambiguity of human nature and the cosmos: the snail is a hermaphrodite animal, male and female at the same time.

The simultaneous presence of two opposite and complementary natures in the same being. The artist often represents it as transparent crystal, almost to underline the extreme fragility of the idea of ​​perfection that lies behind the beauty of form.

Good and evil, the clear and the dark, the Yin and the Yang, in that precarious and perfect balance that is the motor of life.